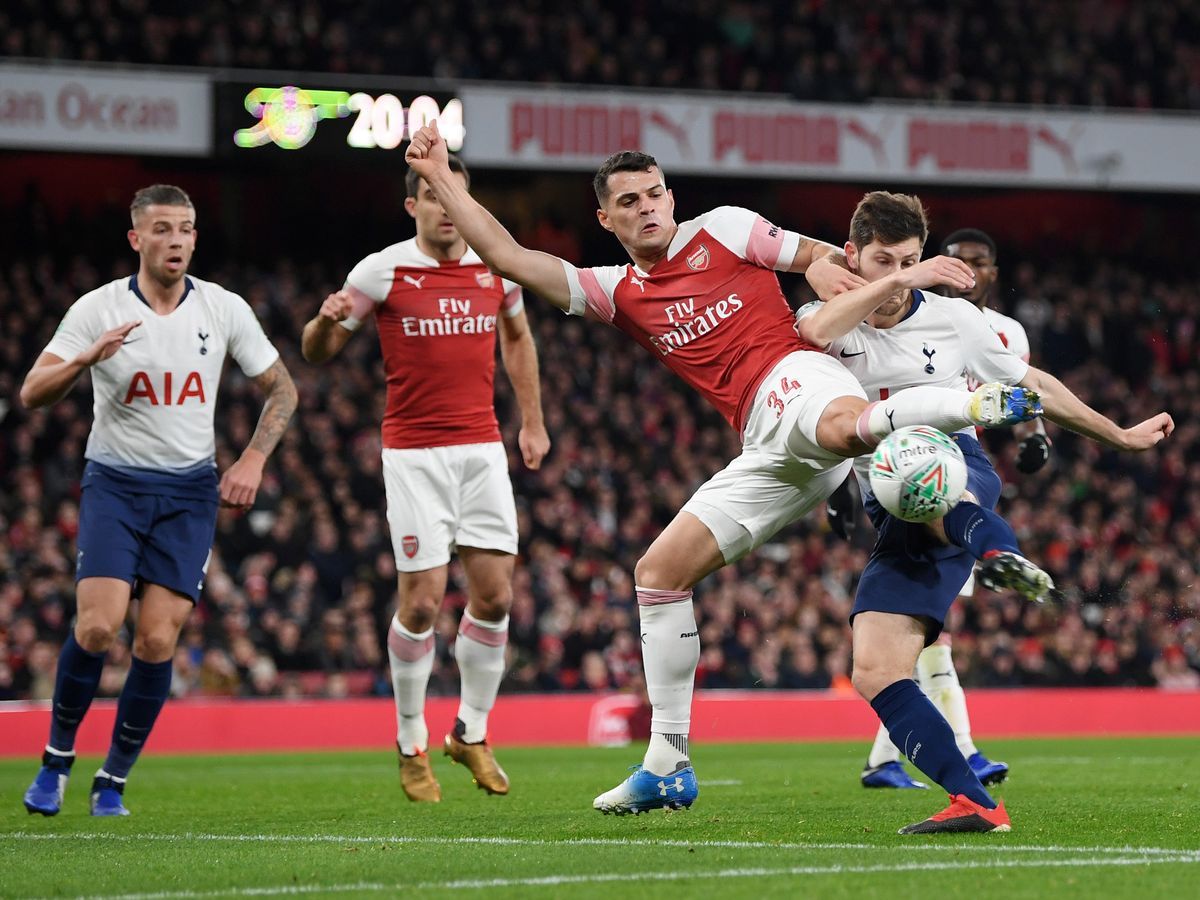 Number of meetings at Highbury/Emirates Stadium in the Premier League era: 27

The North London Derby is always one of the most anticipated local rivalries, not just in English but in world club football. Arsenal have had the advantage historically on home territory. However, Tottenham’s rapid improvement in recent years under the guidance of Mauricio Pochettino has made this clash even more intriguing. Spurs have finished about Arsenal in the league in each of the past three seasons.

With the early September clash approaching, it is time to open up the archives and lookback on 10 previous meetings between these sides at either Highbury or The Emirates Stadium.

Victories for Tottenham on Arsenal’s home patch have been few and far between in the Premier League era. Precisely, that number stands at two but they did secure a triumph in the final match to be played in the inaugural Premier League campaign. The unlikely hero for the visitors was John Hendry, who scored twice. Teddy Sheringham’s 22nd goal of the season secured the Golden Boot. The victory also ensured Spurs finished eighth, two places above the Gunners in the final standings.

Gerry Francis’ unbeaten run as Tottenham manager in North London Derbies ended with this agonising late defeat at Highbury in November 1996. Ian Wright opened the scoring via the penalty spot but Andy Sinton’s slightly fortunate equaliser drew the visitors’ level. Then, in the 88th minute, Arsenal skipper Tony Adams hit a superb shot which took a slight deflection to give Arsenal their lead back. Dutchman Dennis Bergkamp sealed the victory with a brilliant individual goal in stoppage-time to ensure Arsene Wenger ended up as a winner in his first NLD encounter.

Early on the morning of 31st March 2001, news broke of the tragic death of ex-Gunners midfielder David Rocastle aged just 33 after a battle with cancer. Rocastle has been part of Arsenal’s title-winning sides of 1989 and 1991. He wore the no.7 shirt during his time at Arsenal and it was the player wearing no.7 in this fixture in 2001 who opened the scoring. Robert Pires scored a brilliant goal, cutting in from the right-hand side on 70 minutes. Thierry Henry wrapped up the victory in the closing stages for the home side.

The gulf between these sides in the early 2000s was vast and Arsenal dominated this match, marked by a sensational individual goal. From a Tottenham throw-in, Thierry Henry led out a counter-attack. The Frenchman proceeded to run the length of the pitch, holding off Matthew Etherington and dodging two tackles before finishing emphatically past Kasey Keller. Henry’s solo effort was later voted Goal of the Season by viewers of ITV’s The Premiership. Wenger’s side had two more goals disallowed for offside and second half efforts from Freddie Ljungberg and Sylvain Wiltord put the seal on a commanding victory.

The last North London Derby at Highbury ended with honours even in another hotly-charged contest. Tottenham went into the match as favourites to land fourth position in the table above their local rivals and took the lead in controversial circumstances. Robbie Keane tapped home on 66 minutes but Arsenal were outraged play wasn’t stopped as two of their players were injured and out of the game. It led to a fiery clash on the touchline between the two managers, Wenger and Martin Jol. Spurs were denied victory though by another goal in this fixture from Henry, six minutes from time.

Victory in this fixture would have taken Arsenal top of the table, whilst Spurs were bottom and had only just chalked up their first league victory of the season three days earlier. Harry Redknapp’s first away game as Tottenham manager remains one of the all-time classics in Premier League history. It started with a brilliant long-distance effort by David Bentley – an ex-Arsenal youngster on 13 minutes. 1-1 at half-time thanks to a Mikael Silvestre equaliser, Arsenal took control in the second half, leading 3-1 and 4-2 for large periods. Tottenham weren’t done though yet and two incredible late goals from Jermaine Jenas and Aaron Lennon saw them rescue an unlikely and sensational point.

Tottenham’s one and only victory at The Emirates came in a stirring fightback in November 2010. It was their first victory away against any of the established ‘Big 4’ teams (Arsenal, Chelsea, Liverpool FC and Manchester United) since August 1993. Arsenal dominated the first half and led 2-0 at the interval, courtesy of goals from Samir Nasri and Marouane Chamakh. Gareth Bale led the fightback, ably supported by Rafael van der Vaart and Younes Kaboul. It was the Frenchman’s towering header with four minutes left to play that completed the comeback and gave Tottenham fans a day they will never forget. Arsenal’s second half collapse left their players desolate and saw them miss the opportunity to overtake Chelsea at the top of the table.

This time around, it was Arsenal who produced the fightback from two goals down. They looked in real trouble after humbling recent defeats in the UEFA Champions League and FA Cup. It didn’t get any better in the first 40 minutes for Arsene Wenger who saw his side concede twice to Louis Saha and ex-Arsenal player Emmanuel Adebayor. Bacary Sagna’s brave header gave the home side hope and amazingly, they were level at half-time. Robin van Persie produced another goal to his growing collection. In the second half, it was Tottenham looking shell-shocked. Tomas Rosicky put Arsenal infront before two quick-fire strikes from Theo Walcott put the game beyond the reach of Redknapp’s stunned visitors.

Nine months on from their February encounter, this match finished with the same scoreline of Arsenal 5-2 Tottenham Hotspur. Adebayor was at the centre of the talking points again. After putting Spurs infront clinically, his reckless high challenge on Santi Cazorla saw him sent off by referee Howard Webb. Arsenal were absolutely ruthless. There were first NLD goals for Per Mertesacker, Lukas Podolski and Olivier Giroud as they punished Adebayor for his moment of madness.

One of the best games of the 2018-2019 Premier League season saw Arsenal put in a performance that suggested Unai Emery was putting his stamp on the team. Despite dominating the first 30 minutes, they went into the half-time dressing rooms behind on the scoreline. Rapid goals from Eric Dier and Harry Kane cancelled out Pierre-Emerick Aubameyang’s early penalty. Aubameyang’s second goal was a brilliant strike and the momentum continued to ebb and flow before Alexandre Lacazette’s bobbling shot found its way past Hugo Lloris on 74 minutes. The outstanding Lucas Torreira capped off a fine individual display with his first Arsenal goal 13 minutes from time. Jan Vertonghen was sent off towards the end to cap off a miserable conclusion to this match for Spurs.