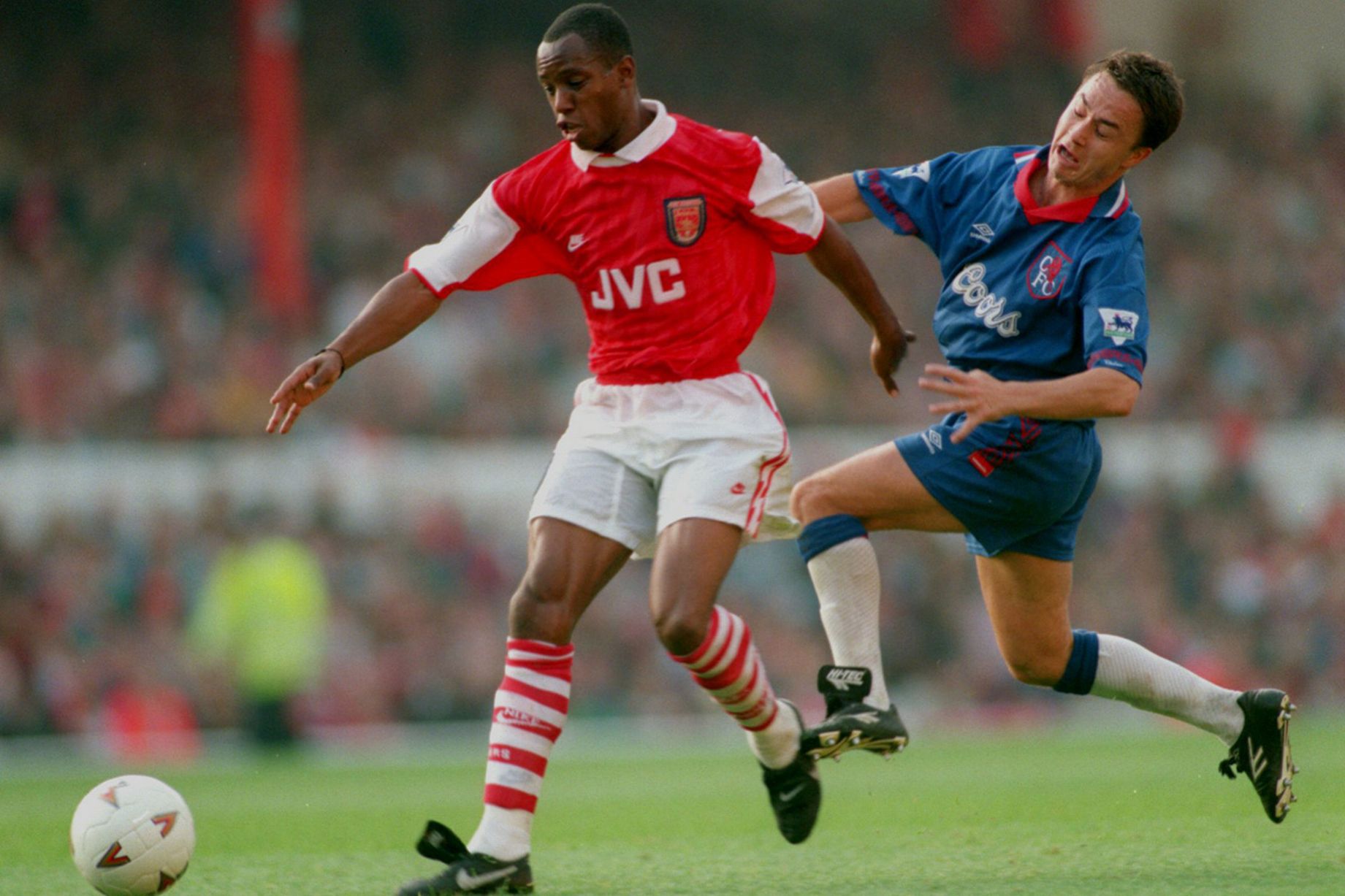 Arsenal went into the 1994-1995 Premier League campaign as reigning holders of the Cup Winners’ Cup and confident on building on the previous season’s fourth place finish in the Premier League. Ultimately, it turned into a season of turmoil and trouble at Highbury.

The Gunners spent much of the domestic season in the bottom half of the table and finished a disappointing 12th. Off-the-field problems also inflicted the club as Paul Merson came clean on his drug and gambling addictions, whilst long-serving manager George Graham was sacked after his role in transfer payments went public. There was a Cup Winners’ Cup final in Paris but even that ended in defeat to Real Zaragoza.

In the previous five seasons, Arsenal had enjoyed plenty of success. League champions in 1989 and 1991, FA Cup and League Cup winners in 1993 and they went into this 1994-1995 season off the back of victory over Parma in the Cup Winners’ Cup final.

Therefore, manager George Graham didn’t see any significant need to bolster his squad, believing it was capable of challenging the likes of Manchester United and Blackburn Rovers for the Premier League title. There was one main addition though and that came in midfield.

Stefan Schwarz had been part of an impressive Sweden side that reached the semi-finals of the 1994 World Cup finals in the United States. Schwarz had missed that match after being sent off against Romania in the quarter-finals. Fans hoped he was the playmaker that was finally being brought in to replace David Rocastle when he transferred two years earlier to Leeds United. In truth, he was a tough-tackling midfielder and gave a bit more bite into an area where Graham felt they had lacked a presence in during recent seasons.  He joined from Portuguese giants Benfica.

The Premier League campaign began with a fine 3-0 home victory over Manchester City. The dynamic contribution of Kevin Campbell and Ian Wright both scored but those would be the only goals Arsenal scored in their first five matches.

A gutsy display away at Leeds a few days later ended with nothing to show for their efforts. David Seaman made a rare error, allowing a long-distance strike from Noel Whelan to beat him in the 89th minute. Before August was out, Arsenal had been blown away at Anfield by Robbie Fowler. Infront of the Sky Sports cameras, Fowler hit one of the fastest hat-tricks in English league history, scoring his treble in just four minutes and 33 seconds. Liverpool won the match 3-0.

Underwhelming goalless draws followed at home to Blackburn Rovers and away at Norwich City. The pre-season optimism around Highbury had quickly fizzled out and it wasn’t about to get any better.

Although there was a dismal 2-1 home defeat at the start of October to newly-promoted Crystal Palace, Arsenal did enjoy an upturn in league fortunes that month. Three consecutive victories over Wimbledon, Chelsea and Coventry City did see the Gunners hit ninth place in the table. Incredibly, that would turn out to be their highest position of the entire season after the opening weekend. Once again, it was Wright who was leading the charge when it came to goals. His double in the 2-1 win against Coventry took him to nine Premier League goals already for the season. In fact, by the end of October, he’d scored 53% of Arsenal’s league goals so far!

Wright finished with 18 Premier League goals for the season and 30 across all competitions in another brilliant individual season for the marksman. It was a rare bright spot in a very tough season for Arsenal and off-the-field issues started to dominate their season as 1994 drew to a close.

First in November, creative midfielder Paul Merson confessed to his addictions with cocaine, alcohol and gambling. At a news conference, he couldn’t control his emotions any further and broke down in tears. The FA supported the England international throughout, putting him on a three-month rehabilitation programme which included a stint of counselling. He wouldn’t play a first-team match during that period whilst he attempted to beat his demons off-the-pitch.

Less than a month later, manager George Graham came into the spotlight with the newspapers. Reports began to emerge Graham was involved in accepting transfer payments from Norwegian agent, Rune Hauge. Effectively known as a bung, the transfer dealings of Scandinavian pair, Pal Lydersen and John Jensen came under serious scrutiny and it was dominating the gossip columns ahead of Arsenal’s trip to Maine Road to play Manchester City on Monday 12th December 1994. The Gunners put in their most convincing performance for several weeks to win 2-1. After the match, a defensive Graham told Sky Sports: “I have not profited from any of Arsenal’s transactions in the transfer market and I don’t want to comment any further on it.”

Graham has to go

That win at Maine Road kept Arsenal in mid-table but only four points off sixth place. There was still an opportunity to salvage something from the second half of the season. However, form completely deserted the club with only two wins from their next 10 league matches. They came away at hapless Ipswich Town and a scrappy 1-0 success away at struggling Coventry City.

In this period, cult hero Jensen scored his one and only Arsenal goal with a brilliant strike on New Years’ Eve in a desperate 3-1 home loss to fellow Londoners Queens Park Rangers. On the next day, one of the tabloid newspapers ran the following: SOUVENIR SPECIAL: After 98 games, 2 years, 4 months, 2 weeks, 2 days, 1 hour and 19 minutes, JENSEN SCORES!

However, fans were getting frustrated with the lack of direction under Graham who was now into his ninth season in the dugout at Highbury. He did respond shortly after a 1-0 loss to north London rivals Tottenham Hotspur, bringing in highly-rated Luton Town teenager John Hartson, whilst Chris Kiwomya was also acquired from Ipswich Town. Hartson did score the winner at Highfield Road in only his second game for the club but a dangerous challenge in his next away outing saw him red-carded at Hillsborough in a 3-1 loss to Sheffield Wednesday.

Captain Tony Adams was also dismissed on another demoralising afternoon in Yorkshire for the Arsenal faithful. A shocking FA Cup third round exit to First Division side Millwall piled the pressure on further and with the allegations over transfer bungs not going away, Graham simply had to go. He was sacked towards the end of February and following an FA investigation, was banned from football involvement for a full year. It was a sorry end to what had been a very successful reign as Gunners boss.

Arsenal immediately reacted by upgrading Graham’s assistant Stewart Houston to first-team manager for the rest of the season. He began with a 3-0 victory away at Crystal Palace, in a match that saw Merson score his first goal since returning from his time away from the pitch.

Yet again, it was a result that turned out to be a false dawn. Arsenal would lose six of their next seven matches, including a home defeat to West Ham United for the second consecutive season and another 3-1 loss to QPR. Against the London sides, Arsenal’s record in the campaign was poor. In 12 games against the other six capital clubs, the Gunners lost 50% of those matches and only beat Chelsea on their own patch.

Going into the Easter weekend, Arsenal sat in 12th place but far too close to the relegation zone for comfort. They were still only five points clear of Crystal Palace, who were occupying the fourth and final relegation spot. Easter finally brought about some welcome relief. Wright led the charge with a hat-trick in a comfortable 4-1 win on Easter Saturday against bottom club Ipswich Town. 48 hours later, both he and Hartson scored twice in a 4-0 rout of Aston Villa at Villa Park in what was probably the club’s best performance of the Premier League season. Barring a mathematical nightmare, the Gunners were safe.

Just two more points were gained in their last three games and Arsenal eventually finished in 12th place. Out of the London sides, they only finished above West Ham United and Crystal Palace and this finish remains their lowest-ever Premier League table position. The one crumb of comfort was their European form.

For the second successive season, Arsenal reached the Cup Winners’ Cup final. They’d beaten Omonia Nicosia, Brondby, Auxerre and dramatically, Sampdoria in the semi-finals where Seaman had been the hero in the penalty shootout. The Gunners were expected to defend the trophy successfully against mid-table Spanish outfit Real Zaragoza in the final. After falling behind, Hartson equalised and the game went into extra time. With penalties looming, ex-Spurs striker Nayim tried his luck from 40-yards out and his ambitious attempt flew over the top of Seaman’s head and into the back of the net. Zaragoza won 2-1 and their first-ever European trophy. Arsenal’s campaign had nothing to show for its efforts.